After posing as the “Wow Picture of the Day”, Sharpe James, the mayor of Newark, drops his bid.

I’ve been humming the theme song to Duck Tales, part of the old Disney Afternoon programming block from the late 80s-early 90s, off and on for several weeks now. So today before I left I gave in to the urge to search for a download of theme song.

And, damn, it craked me up to hear it. It’s been YEARS since I’ve listened to this stuff. And how could anyone forgot that classic Duck Tales video game for the NES? So far I’ve tracked down Gummi Bears, Chip N’ Dales Rescue Rangers (I knew about the “other” meaning even back then), Darkwing Duck, and Gargoyles. Tale Spin appears to be a real challenge to find.

And for those who care, Gargoyles is available on DVD. I was surprised and will likely pick up a copy. Arthurian legend mixed with the Illuminati and other cults and myths in this surprising “children’s” show.

So the first day of Sweet 16 games wrapped up, and I just checked in on the brackets. The wheat is finally being separated from the chaff in the pool, with several people falling down hard over the Gonzaga, West Virginia, and Duke loses. Crazily enough, I apparently changed things up at the last minute before the tourney started, picking UCLA to be in the championship game after beating Duke in the Final Four game. I didn’t even realize this until after the ridiculous comeback to beat Gonzaga.

Good stuff – I love this time of year.

I’ve been working on a side project for myself, and I’ve been wondering how in the world I was going to find a list of all the drugs approved in the US. There are various websites out there, but nothing that would allow me to load the data directly in to a searchable database.

Enter the FDA. Believe it or not, the FDA provides a list, updated every Wednesday. All ready for importing in to a database.

Newark Mayor Sharpe James delivers his signatures for his petition to run for another term in office. 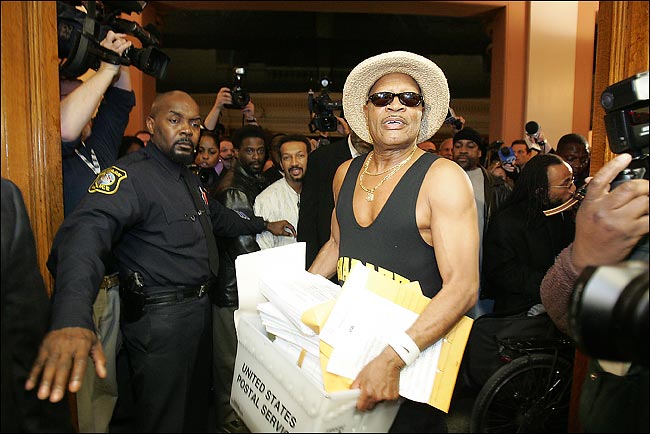 Protests in France (no surprise there) have broken out over a new labor law aimed at making it easier to both hire and fire workers. The choice quote in the article has to be this one from a civil servant.

Civil servant Nicole Beauregard, who marched with her teenaged daughter, said: “Young people are less well-armed than we are to defend themselves.

“Getting into the workforce is already hard enough for them, and now they are putting up another obstacle.”

Granted, I don’t know the details of the law. And often the deviler are in the details. But if you’re arguing with the concept, then you don’t get it. No company is going to take on a new worker that it can never let go, even if performance is poor or the company falls on hard times economically. Especially when there are plenty of other places in the world where it’s much easier to get the same quality work done without the headaches.

If these people want to protest for something, look for a fair safety net that helps cushion workers from unemployment while providing benefits to transition to a new career. That would be a more worthwhile investment.

So, Kansas loses in the first round of the NCAA tournament, knocked off by Bradley. That makes for one of the larger upsets in our tournament bracket, knocking a few people down significantly in their best possible scores. Yet while more than one person had Kansas in the Final Four, only one person had Bradley winning the first round game (Rizzo, you bastard). Thank you, Big East bias, for helping me select Pittsburgh to win in round two.

I don’t discuss this in great detail with many people, but it’s a significant part of the answer to one of the most common questions I am often asked by friends and family. The question, “Why do you like Asia so much?”

The answer lies largely in the dynamism that is exhibited throughout most of the Pacific rim. I often say that when you visit one of the cities, if you go back in two years entire neighborhoods may have been demolished and re-created during your absence. As Susan aludes to, their investment in infrastructure, in a basic layer of services, from mass transit to new construction to high speed fiber optic networks and mobile phones that can stream video in real time that are affordable and common. Throughout Asia this is ongoing and breathtaking in its speed. For those who aren’t living and seeing it firsthand, it’s hard to comprehend.

I’m convinced that the short-term emphasis, on profits over true research and investment, on public policy that makes little to no sense over the long term in order to support short term goals are all contributing to these factors. I won’t say public policy is equally good in all locations throughout the region, but I see a willingness to experiment and invest that is lacking in quite the same way here. We’re too invested in what we have to think about what may have tomorrow, if only we’re truly willing to throw caution to the wind.

Yet another entry in the how-does-he-find-this-stuff list – four friends blog about opening a new night club in Singapore.

Since my day was rather unventful, I’ll instead comment on an article I read online. Immigration checkpoints have been established in the DMZ in South Korea to facilitate travel to North Korea Having stood in the incredibly tense atmosphere that exists at the border, this is a symbol of detente that is hard to believe. While the restrictions are tight on those who travel north, from my conversations I would believe South Korea is happy to have this program. The desire for reunification is strong everywhere in South Korea, so a program like this, that helps open the border, must have gone over quite well. My only fear is whether it helps prop up a dysfunctional regime even a day longer than necessary.